Characters as arranged by the inventor.

Characters systematically arranged with the sounds. 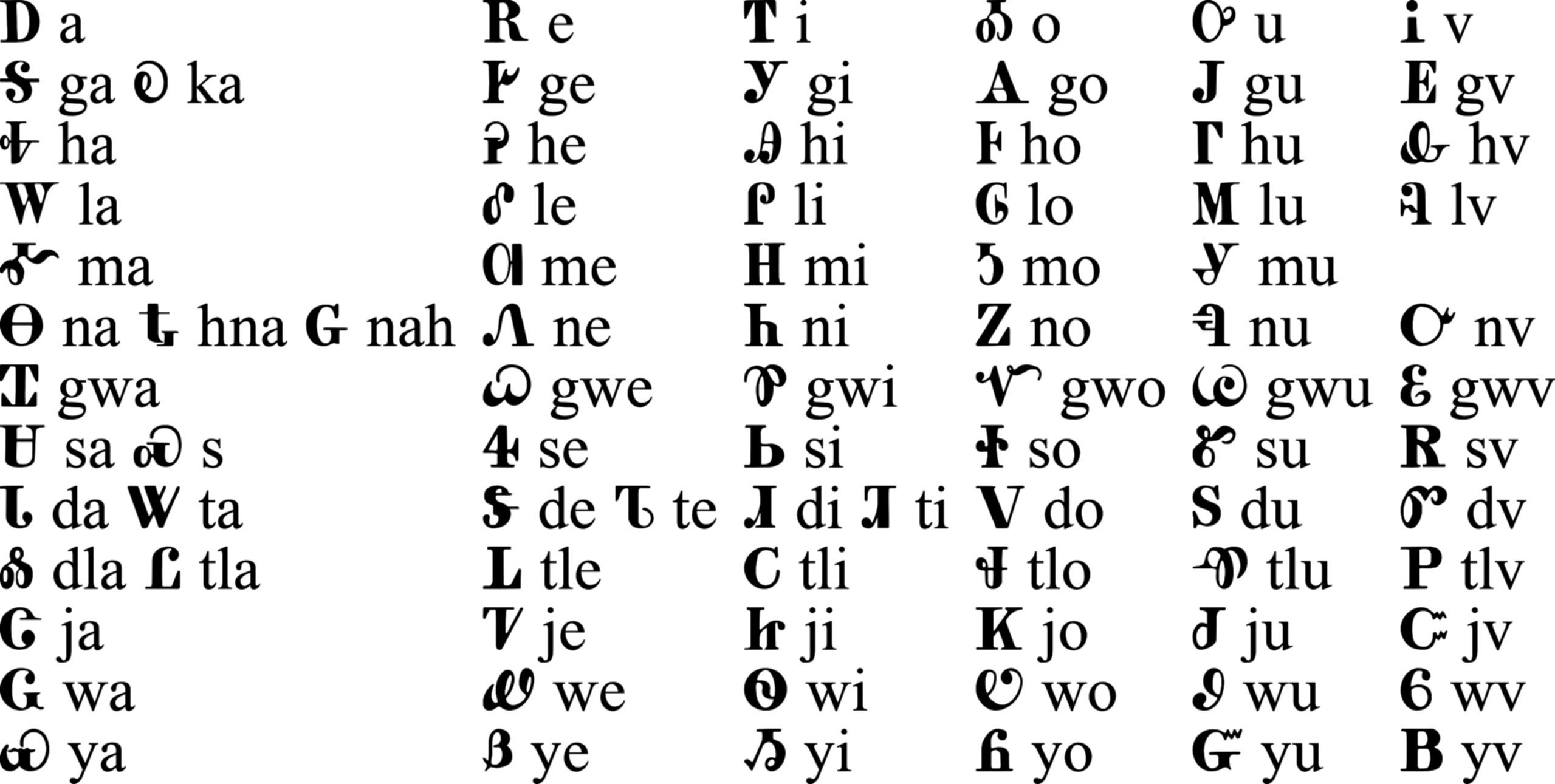 All other letters as in English.

The Cherokee language has but two separable personal pronouns, viz.: First person singular and plural, A-yv (ᎠᏴ), “I and we.” Second person singular and plural, ni-hi (ᏂᎯ), “thou and you.” The third person is indicated by na (Ꮎ) or na-ski (ᎾᏍᎩ), “that,” or hi-ya (ᎯᏯ) or hi-a (ᎯᎠ) “this,” or by a verb expressing some attribute or condition of the person spoken of, as:—

The Cherokee language has a form of personal pronouns, which may be termed reflexive; in which all the distinctions of person are indicated. This form has the sense of myself, thyself, &c., as the following will exhibit.

The following table exhibits the possessive pronouns; the object possessed being singular.

When the posession of more than one object is to be denoted, the prefixes are varied thus:—

In the congugation of verbs the person is indicated by inseparable prefixes, as:—

In some tenses the personal prefixes take the following form, as:—

In some tenses the personal prefixes take the following, as:—

The simplest form in which we find being and tense, indicated in Cherokee, is in the Impersonal Substantive Verb ge-sv-i (ᎨᏒᎢ), “being,” and i-gi (ᎢᎩ), “is.”

The distinctions indicated by the inflections of this verb, are combined with several of the simple tenses of regular verbs, forming compounds by which many very minute divisions of time, are marked with great precision.

The ge-so-i (ᎨᏐᎢ) inflection modifies the principal tense, so, as to indicate the usual, customary or habitual prevalence of what is affirmed, in quantity, quality or frequency: or under certain circumstances or conditions.

Note: The terms which, in this material, are given to the conjugations, moods, tenses, and other distinctions, indicated by the inflections of the Cherokee verb, are only used provisionally; such terms vary widely in other materials.

Present Tense and its Modifications.

The Present Tense, showing the distinctions of person, and the modifications of tense.

By connecting each of these terminations with each of the persons of the verb, all the modications of this tense will be expressed in each person, thus, tsi-ne-ga (ᏥᏁᎦ), “I am speaking,” hi-ne-ga (ᎯᏁᎦ), “thou art speaking,” &c.

If the English affixed to each modification of this tense, varied to suit the person, be affixed to the verb, with the corresponding termination as in the tables, all the variations of person and tense will be expressed. This remark is applicable to the other tenses which admit of similar variations.

The Immediate Past Tense.

The Immediate Past Tense does not admit of being modified like the present, perfect and future tenses.

Modifications of the Perfect Tense.

The Perfect Tense, exhibiting the distinctions of person and modifications of tense.

If each of these terminations be connected with each person of the verb, as in the present tense, all the modifications of the tense will be expressed, in each person.

Imperfect of the Future Tense

(with my personal knowledge)

This tense admits of modifications similar to those of the present, perfect and future tenses, as will be seen from the following. The personal prefixes the same as the foregoing.

The following form marks the time just before the action of the verb, or the event referred to:

The personal prefixes are the same as in a-ki-ne-tsi-di (ᎠᎩᏁᏥᏗ) and its modifications.

The following form may be used as a conditional future tense of the Indicative Mood, or as a mild expression of the Imperative Mood.

Adjective indicating an aptness to the action of the Verbs.

This form admits of modifications of tense similar to those of the present. The personal prefixes are the same throughout.

The Negative of the Conditional Potential Mood.

The same modifications are made in the tenses of the Subjunctive Mood as in those of the Indicative: except that the forms which end in gv-gi (ᎬᎩ) and gv-i (ᎬᎢ), and which imply certainty and personal knowledge in the speaker, are wanting in this mood.

tla (Ꮭ) prefixed to any tense in this mood makes it a negative; as tla yi-tsi-ne-ga (Ꮭ ᏱᏥᏁᎦ), (I do not speak.)

Modifications of the Present Tense of the Subjunctive Mood

The following are modifications of the Present Tense of the Subjunctive Mood. The personal prefixes the same as the Simple Present.

Modifications of the Future Tense.

In the following modifications of the Future Tense the personal prefixes are the same as in the foregoing conditional or contingent form.

The Imperfect of the Future.

The Double Future, or Future of the Future.

Modifications of the Perfect Tense.

These modifications of the perfect tense are not often used without the negative tla (Ꮭ): with which prefixed, the word becomes negative instead of hypothetical. The particle tla (Ꮭ) has a similar effect before all other tenses in this mood.

Present Tense. Active Voice. [To him.]

Present Tense. Active Voice. [To them.]

Present Tense. Active Voice. [To you (three or more).]

Present Tense. Passive Voice. [Spoken to by him.]

Present Tense. Passive Voice. [Spoken to by them.]

Present Tense. Passive Voice. [Spoken to by you, (two).]

Present Tense. Passive Voice. [Spoken to by you, (three or more).]